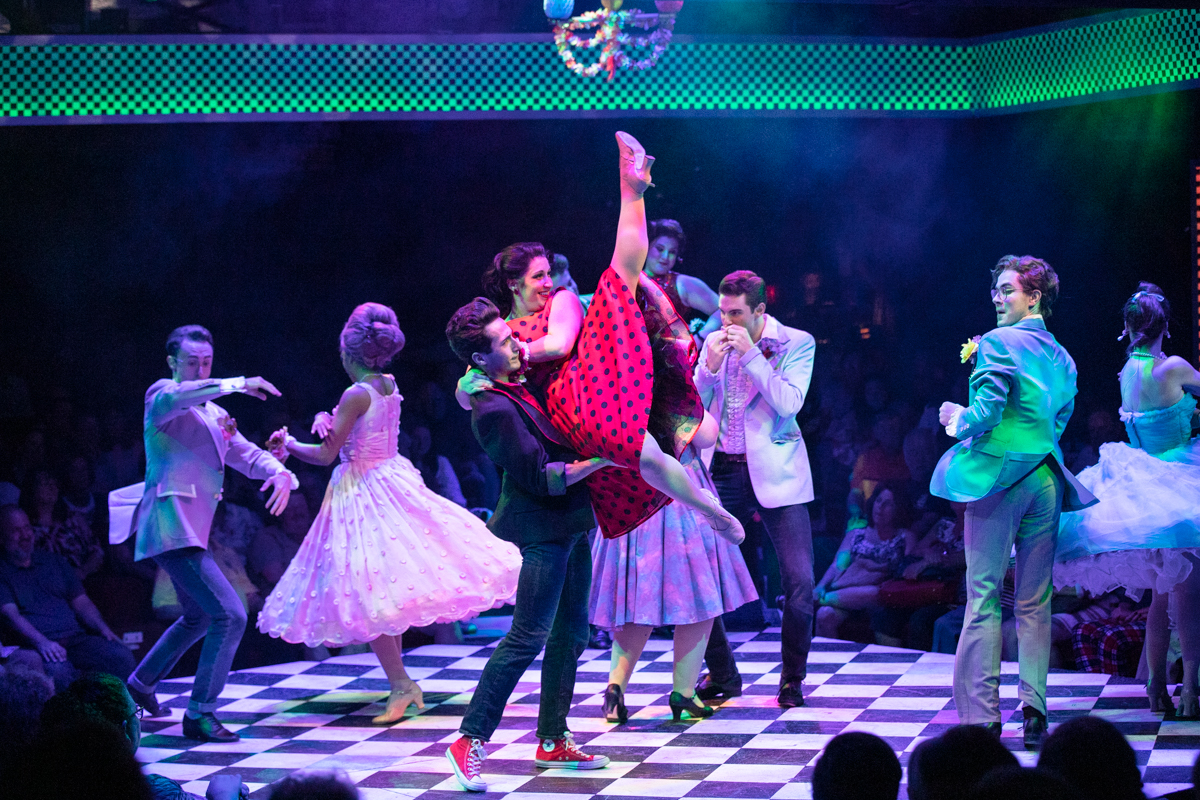 “The 18 or so players could not have been better-chosen for this production and it is their youth and-God knows-their energy that keeps the show so vivaciously vital.”

“The big dance numbers that hit the high spots as a dozen or more kids dance as though the world might be coming to an end at any moment.”

“It is easy in his performance to see why so many young women find him (Anthony DaSilva) attractive and would “give out” just to hold him close. It’s an excellent performance.

“Betty Rizzo, Angie Colonna delivers on every level. When she mocks the heroine, it is with honest disdain. When she communicates her odd personal fears, it is with genuine angst.”

“Sandy Dumbrowski, played with delicacy and sweetness by Emma Flynn, a pretty blonde lass with avoirdupois to boot. This girl has a voice and a way of communicating Sandy’s inner feelings with a look or a gesture that marks her as a definite winner in the character sweepstakes in this show. Flynn gave a whirlwind performance.”

“There wasn’t a missed character in this large company—everyone was at his or her best.”

“Romagnolo has surpassed himself with this show and the result is so entertaining that if the show had no story, no plot and no songs, it would still be devastating to watch.”

“What they do with this production of Grease, they do with all the expertise, quality, and theatre-goers have come to expect—and receive—from a Mac-Haydn production.”

“Grease is two and a half hours of foot-tapping, sing-along, sit- back- and -enjoy musical theatre.”

“In the lead role of Danny Zuko, Anthony DaSilva takes to the round stage as if born to it. He has the voice for the role–and then some!”

“Emma Flynn is an ideal choice for the innocent, naive Sandy… Flynn has a beautiful pure voice, with stage presence to match… her final duet with DaSilva of “You’re the one that I want” literally shakes the rafters of this barn-cum-theatre in the round.”

“Loaded with all the energy of the assembled youthful cast, the stage almost literally shakes, rattles and rolls every time a member of the ensemble gets their turn in the spotlight.

“As Doody, Kylan Ross’s rendition of “Those Magic Changes” earns him an A+ for his spot-on vocals…”

Elizabeth D’Aiuto makes the most of her turn as Marty… D’Aiuto carries off her number with aplomb and vocal accuracy.”

“There is no denying Hale’s enthusiasm as he presents this signature number. He leaps with abandon, sings with gusto, and overall makes us hope for a ride in his cherished automatic.

“As Roger and Jan, Joe Hornberger and Zoey Bright inject a lovely dose of almost over the top camp with their rendition of “Mooning”.”

“Maya Cuevas shines as Frenchy, the “Beauty School Dropout”. Her wide-eyed looks of astonishment, and subsequent reactions are worth the price of admission.”

“Colonna creates the brittle Rizzo personna necessary to play against the sweetness and light of the soon-to-be converted, or subverted, Sandy. Her mocking “Look at me I’m Sandra Dee” in Act 1 is played with nuance and a curled lip; her voice is big, bold, and in perfect keeping with the character.”

“Romagnolo brings to Grease the signature style that brought him a Berkie Award in 2017. Lithe, sinewy, sometimes almost writhing dance movements infuse much of the dance work throughout the show.”

The Sugarmans from More Theatre Talk Talk to Danny, Sandy and Cha-Cha Grease