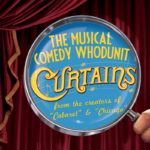 This brassy and bright broadway smash makes its Mac-Haydn debut! It’s opening night at the Colonial Theatre when the leading lady mysteriously dies on stage. The cast and crew are all suspects when the leading detective shows up to crack the case and save the show. From the writers of Chicago and Cabaret, this Kander and Ebb whodunnit is a laugh riot with an incredible score to boot.

Colin Pritchard returns to the Mac-Haydn in the role of Lieutenant Frank Cioffi. He was last seen in 2018 as Bill Austin in the hit Mac-Haydn production of Mamma Mia!. Colin’s past MHT roles also include Freddy in Dirty Rotten Scoundrels, Wilbur in Hairspray, Igor in Young Frankenstein, and Bobby in Crazy for You. Other credits include the tours of Billy Elliot (N. America / Brazil) and 42nd Street (US /Japan), and regional work at Goodspeed, TUTS, The MUNY, Westchester Broadway, among others.

Mac-Haydn favorite Monica Wemitt returns to the stage as Carmen Bernstein. Past credits at Mac-Haydn include everything from Lily Garland and Marion Paroo to Madame Thenardier and Frau Blucher. Monica has toured nationally and internationally with Hello, Dolly!, Beauty and the Beast and Liza Steppin’ Out. One of her most memorable experiences was singing at a tribute to Steven Sondheim at Carnegie Hall.

Making her Mac-Haydn debut, Leigh Martha Klinger stars as Georgia Hendricks. Leigh was born and raised bilingual in Germany, studied Drama in Munich and has worked throughout Europe. Additional credits include We Will Rock You, Rebecca, Les Miserables, Murder Ballad, Lucky Stiff, The Rocky Horror Show, Cabaret, Into the Woods, Avenue Q, and American Idiot.

Curtains is directed and choreographed by Courtney Laine Self, music directed by Bruce De La Cruz with costume design by Jimm Halliday and scenic design by Erin Kiernan.