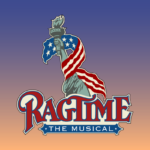 E.L. Doctorow’s novel comes to life in what many say is one of the greatest musicals ever written. We follow three families as they pursue their dreams in the early 20th century melting pot of New York City. Their stories weave together through their courage, compassion, and hope for a brighter future in America. This Tony award winning score includes “Back to Before,” “The Wheels of a Dream,” and “Your Daddy’s Son” just to name a few. This one is not to be missed!

Starring as Mother, Rachel Rhodes-Devey returns to the Mac-Haydn after her performance as Irene Molloy in Hello, Dolly! in 2017. Rachel made her Mac-Haydn debut at the age of 8, and since has performed in major New York City productions, national tours, and regional theatres across the country. She hopes the topics of this show stay in the hearts and conversations of audiences beyond the theatre doors.

Tyrell Reggins makes his Mac-Haydn debut in the role of Coalhouse Walker, Jr. Tyrell is a passionate teaching artist originally from Columbus, Ohio. He recently graduated from Wright State University with a B.A in theater studies, and now resides in New York City. Professional credits include: Dreamgirls, Hair, Hairspray, Fences, Sister Act, Footloose, and “Remember when the 70’s” Show at King’s Island.

Ragtime is directed by John Saunders, choreographed by Sebastiani Romagnolo and music directed by David Maglione, with costumes by Jimm Halliday, wig and makeup design by Matthew Oliver, lighting and scenic design by Andrew Gmoser, props by Joshua Gallagher and sound design by Corbin White.