“Funniest musical of the season!” A review of Spamalot

Originally posted on the Berkshire Bright Focus page.
Review by J. Peter Bergman included in its entirety below.

When the Lady of the Lake sings her duet with King Arthur you know, definitively, that you are in the atmosphere of a big Broadway show. Characters be damned. This is how it is. In every show there is a song that does this, sounds like this, goes like this and in this show it is The Song That Goes Like This. Could anything be clearer? Well. . . . .? No and yes, but that’s part of the joy of this show, now on stage at the Mac-Haydn Theatre in Chatham, New York. From start to finish this is a single joke show where you laugh, almost guaranteed, every two minutes of its 2 hours and fifteen minute running time. That is really not bad; that is wonderful. 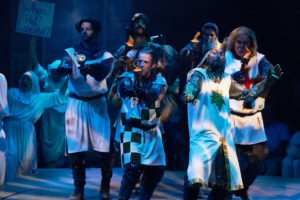 This production in the round gives you ample laugh time and sometimes even something beautiful and rewarding. Where Herbert, for example, sings “Where Are You?” and moments later sings “Here Are You” it is guaranteed to tickle any of your bones, especially the funny ones. Then, in a rapid turn-around, you are swept away with the romantic switch as Launcelot is swept away in a Barry Manilow fantasy, “His Name is Lancelot.”

“Spamalot” is based on the film, “Monty Python and the Holy Grail” and it maintains much of that movie’s hilarity, though altered to fit a stage setting rather than a motion picture. Major characters and minor ones, large moments and small, they all appear in live-on-stage trappings. This show has a large company: nineteen principals, some playing many roles, and fourteen choristers with Eric Idle (pre-recorded) playing the Voice of God. That is a shitload of people on the small stage at the Mac. By the way, you’ll hear that “S” word a lot in this show, but its all in good fun.

John Anker Bow is the anchor for the show, playing King Arthur, or Arthur King, and leading the quest for his men of the round table. Bow is hilarious in his seriousness. It actually makes the parody seem more real, more lively to have him maintain his honesty as the character throughout. Patsy, his faithful assistant is undertaken – all meanings – by Ross Flores who is a delight in the role.

Arthur’s faithfully gathered knights include Sir Robin, played with panache and style by Paul Wyatt, Sir Lancelot, played with an awkwardness that screams fine acting, by Connor Hubbard. Dakota Dutcher plays the intelligent and resourceful Sir Bedevere, leaving an actual wake in his departures. Sir Galahad, the actor formerly playing Dennis, is taken on by the estimable Gabe Belyeu who also transforms himself several times into other parts without any hope of recognition of the other roles. He is dashing and handsome, cruel and demanding, sweetly amusing and outlandishly funny. This almost becomes HIS show. Almost but not quite.

The real battle for top honors is brought on by Madison Stratton as The Lady of The Lake. In Act One she threatens to take the show away from the men, but her scenes end abruptly and she cannot win her battle. In Act Two she mourns her lost stage time and then returns later to wage another battle for supremacy. Among her weapons is a sensational voice and a terrific sense of style. She sings operatically when she’s not singing blues riffs. She pulls attention but sometimes that is because of her entrances, dramatic and forceful. She is another one of those wonders of the world in this role. 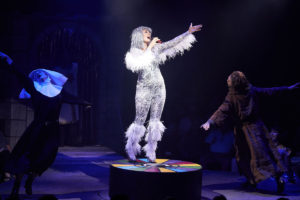 Among the other players there are a few standouts. Ryan Owens as the French Taunter is hilarious. Quinn Corcoran as the Knight of Ni is marvelous, ticklishly funny. Prince Herbert is a fabulous character part played to perfection.

None of the above would be as good as it is without the work of director Neal Kowalsky. He literally guides our eyes to certain places in certain moments. What he has given the actors to do are small things that give the humorous lines that necessary push of guffaw, that passing of over-the-top to a higher level of laughter. He and his choreographer Sebastiani Romagnalo fill the stage over and over with the zany, the outrageous and the gorgeously weird. We are in 932 AD and yet can-can girls and samba boys invade the scene. The opening number with dancers from Finland is brilliantly silly. The two have taken this ever-funny show into the stratosphere of amusement.

They are aided ably by the designers Andrew Gmoser for sets and lighting, Michael Dunn and Timothy Williams for wigs, Megan McQueeney for remarkable props and Angela Carstensten for some of the best costumes of the season anywhere. The two music directors, Jillian Zack and David Maglione, lead a superb ensemble for this show, note-perfect and fully committed to the zany things the score provides.

I wish there were more people to praise on this one. My enthusiasm is highly charged. I knew the show was funny on Broadway when I saw it, but at the Mac-Haydn it is even funnier. I don’t know how that can be, but there you are. Funniest musical of the season!