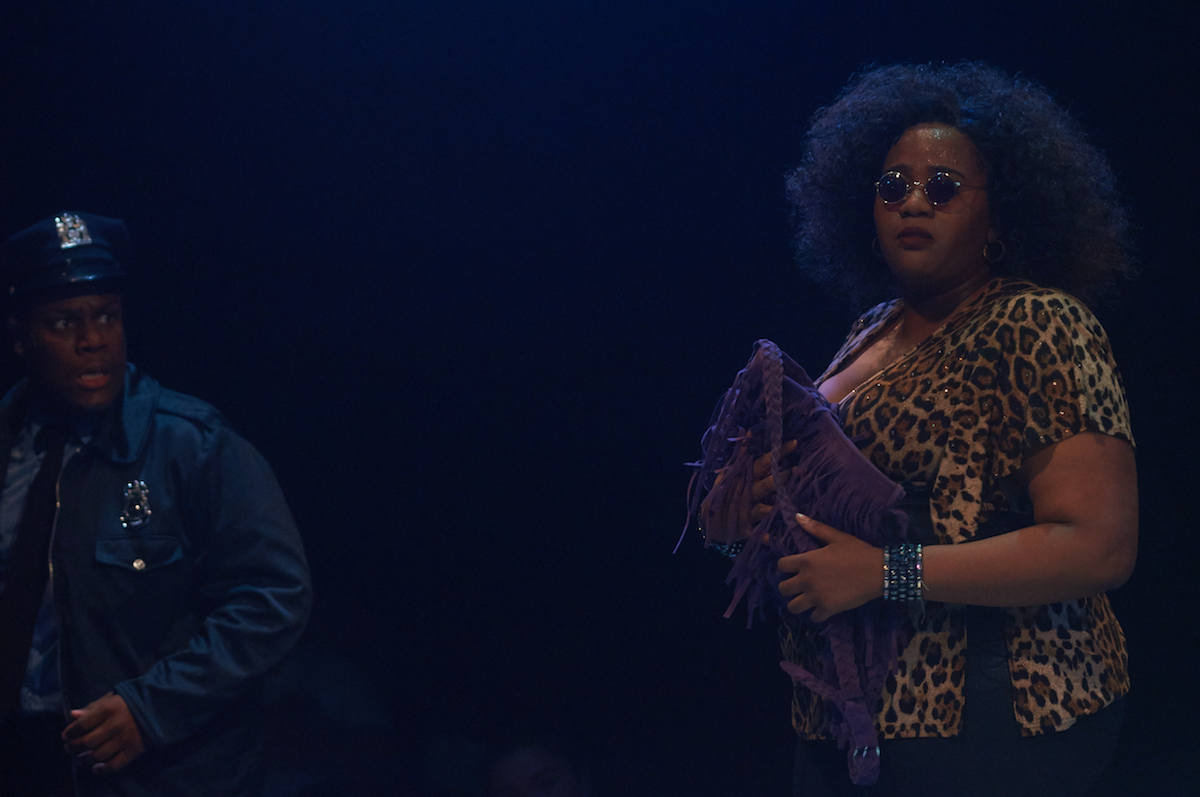 “God loves us when we sing. . .even like that.”
A Review by J. Peter Bergman

Twice the women of “Sister Act,” now playing at the Mac-Haydn Theatre in Chatham, New York, get to sing really, really badly and it is very, very funny indeed. But then the plot of this show, based on the wonderful 1992 Whoopie Goldberg movie of the same name, gives them Sister Mary Clarence, a second-rate nightclub singer really named Deloris Van Cartier (or Doris Carter if you go back far enough in her life history) to lead their vocally battered little group of nuns and in a short time turn them into the gospel-inflected, rock-and-rolling South Philadelphia choir that gets so much attention even Pope Paul wants to come and hear them.

As the story goes, they raise enough money to repair a church that was about to be shuttered by the Diocese, reverse the sale of the structure to two gay antique dealers, fill the building with high-roller worshipers and actually get to sing in front of His Holiness who comes to them and not the other way around. It’s a good story, a lush tale of corruption gone right and bad-guys apprehended in the nick of time, of true love outed and moral judgement suspended to be replaced by non-sexual romantic devotions. If I’ve given away too much, too bad. You will love this show anyway.

Following the most specific formula for writing a musical, after the opening number – an audition for her boyfriend’s club – Deloris gets to sing traditional song number two – the “I want…” song entitled “Fabulous, Baby!” and we are set to follow her on the journey anywhere including a seedy downtown police station, a dreary convent, a garbage-can filled alley, a low-class bar. You name it we will willingly follow because Aneesa Folds, playing Deloris, is leading us there. It is rare to watch an actress visibly enjoying her own work, but without losing character that is exactly what Folds manages to do. Here is a woman whose powerful voice is easily matched by her character development in her scenes. She gives us the beauty of her character’s unacknowledged soul topped with a generous dollop of the actress’s own spirit. When Deloris is at her low points emotionally Folds lifts her up for us through a charismatic delivery. When she is ecstatic, and ecstasies do play a role in the developing studies in this play, she is almost overwhelming. There is a Mahalia Jackson style of control in this young woman’s work, a sense that there is power in the voice to make men weak and women vibrant. If Aneesa Folds was announced to read scripture I would probably alter my schedule to hear her and if she was introduced as merely a singer than “merely” would be an outrageous extreme.

As her bad-boy-friend Gabe Belyeu adds another star to his dressing room door. This is a darkly glamorous role and he handles it superbly. As her biggest little supporter at the convent, Sister Mary Robert, a novice, Emily Louise Franklin turns in a very moving portrayal highlighted with superb singing and two short speeches in the second act that are as moving as anything could be. Carol Charniga is very funny in the role of the ousted choir leader, Sister Mary Lazarus. Erin Spears Ledford is a fine Sister Mary Patrick, the role originated in the film by Kathy Najimy whose physical gestures burst off of Ledford from time to time but her singing outshines Najimy’s by a long, long-shot.

Gabe Belyeu’s trio of supporters were well played by Ryan Gregory Thurman, Chris Hendricks and especially Stephen Millett. Beatrice Crosbie played the spacey Sister Mary Martin-Of-Tours beautifully. Daniel Klingenstein added heft to Monsignor O’Hara and the small role of the Drag Queen. The actor playing the Pope was very funny, but was not actually listed in the program.

Rasheem Ford was perfect in the role of Eddie, the cop who loves Deloris enough to save her over and over. He is a wonderful singer and an even better actor and he makes “Sweaty” Eddie into a real person you’d trust with your life. Monica M. Wemett takes on the role of Mother Superior (Mary-something; even she can’t remember). Her line delivery is exquisite garnering laughs and sighs as required. Her singing is about the best I’ve heard from her in a long while. Her monologues with God are even better than Maggie Smith’s were in the film.

This is my second Alan Menken show of the season, the first being “Little Shop of Horrors,” and I am reminded once again about what a second-rate theater composer he is. He does excellent parodies, even of himself at times, and captures a period of time but he doesn’t leave me excited about the tunes, even remembering the tunes. As Walt Disney’s resident composer he has written the scores for many hit films, some of which have been translated into stage shows, but the one place where the show falls below its potential is in the music, beautifully conducted by Ray Bailey if a bit too loud for the space.

Andrew Gmoser’s sets and lights are excellent as usual. Kurt Alger’s costumes work well for the characters and Rider Q. Stanton handles the sound as well as anyone could (except the band is too loud). As for the team of choreographer Maddy Apple and director Anthony Christian Daniel, the final double effort works very nicely on the circular stage at the Mac-Haydn. I could quibble with a few placements of spoken moments, but it is a large cast and everyone needs to be somewhere. In the two hour and twenty-seven minutes of this musical there would have to be some dull spots, you would think, but now, two hours later, I am hard-pressed to remember even one.

Not the world’s most thrilling musical, it is still a show that leaves you with a divine inspiration to sing, dance and be glad. On a hot summer night, with high humidity and moisture everywhere, that is a sermon I can listen to gladly. This is a winner with great talent in evidence, so “Raise Your Voice,” and “Spread the Love Around.”