Meet the team behind the scenes: A Saturday Conversation 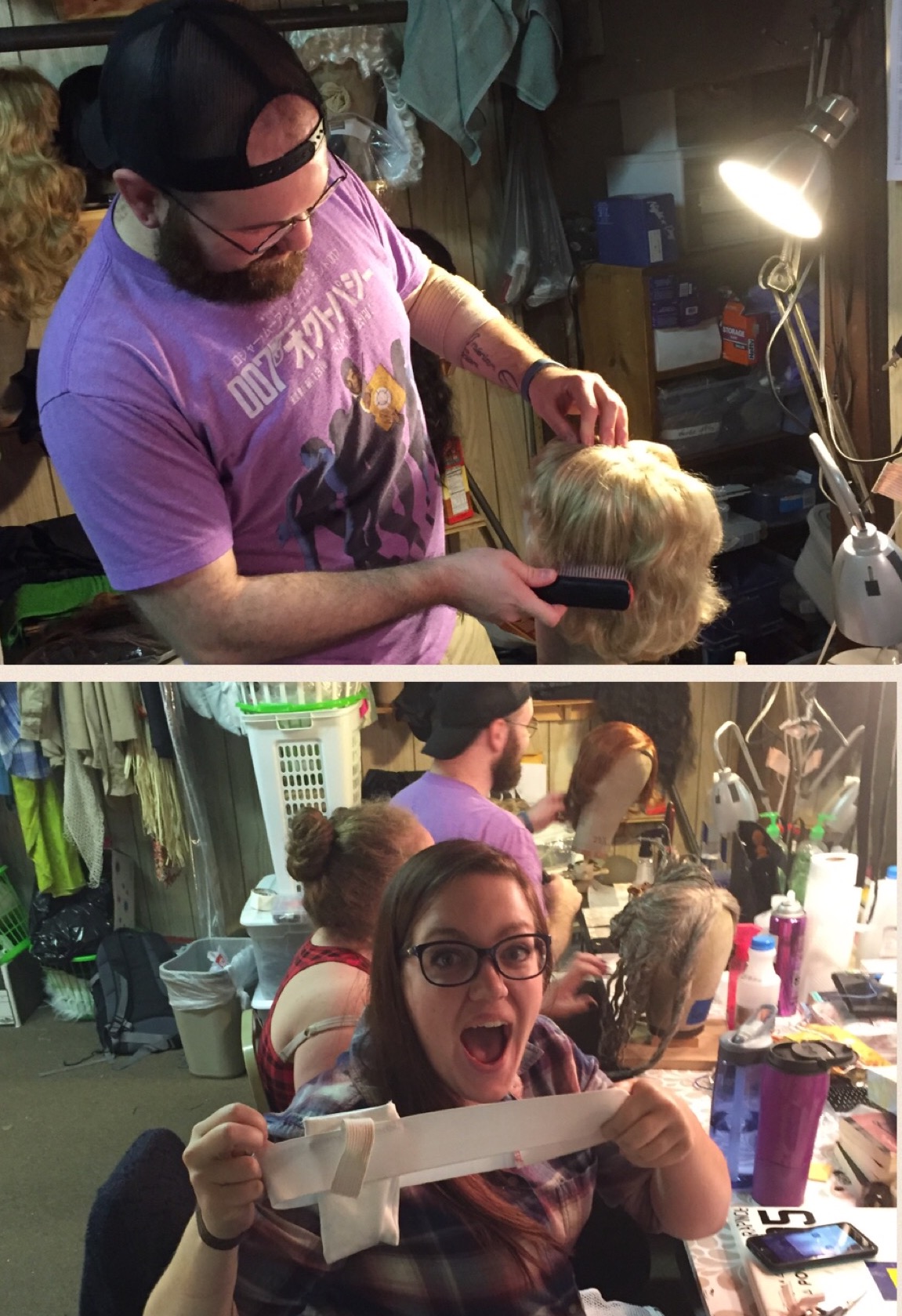 I had the pleasure of sitting down with Zachary Greer Emerson (wig and makeup designer) and Michelina Abrahamzon (wardrobe supervisor) to discuss life, theatre, and their busy schedule.

Describe your position
Michelina – I’m the wardrobe supervisor which means that I’m basically in charge of the costumes once the costume shop is done with them. I’m in charge of making sure the actors are wearing the right thing at the right time and that those things stay in good repair, clean, and well maintained during the run of each production.
Zachary – I’m the wig and makeup designer. Based off what the director and artistic director wants, I make that vision come to life, with the hair and the make up. I make sure everything is accurate to the time, as well as maintaining the styles throughout the run of the show

What about your job do most people not know?
M – I do a lot of paperwork. I expect that people think I just touch clothes a lot, which is true but I also spend a lot of time making paperwork; full charts of every time an actor changes an article of clothing they are wearing. I have that diagramed out for the entire show for every individual actor. I also do costume plots, which is basically the story of the actor’s show in clothes.
Z – There’s a lot more repair work than most people think. I can get a wig from a store and I then have to modify it for a specific actor. For “My Fair Lady” we had to redo the front hairline of an entire wig for an actress. It’s a lot of personalization once it comes to the fittings.

How did you get involved in the position you are in?
M – I’ve done theatre since I was 6 years old. I started off doing drama camps and wasn’t aware there was anything other than being on stage until I got to High School and started seeing all the pieces that go into a production. I went to college and thought I was going to be a college education major. As part of my degree we had to take a class in each technical field. I took a costume construction class and fell in love with it and never left.
Z – I was always big into Halloween. I loved Halloween so much, the idea of becoming someone else. When I was done as an actor and I wanted to move backstage that was first thing I went to after costumes.

Favorite part of the job?
M – I love doing quick changes. I love being the person in charge of getting someone out of an outfit and into a new outfit in 12 seconds flat. I also like dealing with weird things. A year ago I was doing “Little Mermaid” and I had an existential crisis because I was changing people out of mermaids and into clams, and getting paid to do it. I was turning a person into an octopus everyday, that’s weird and that’s awesome!
Z – Its having the gorgeous wig and putting it on your actress and immediately their face changes, they smile, they feel like they’re the character. It’s like when you get that final puzzle piece of their look down, and it helps them so much to bring the character to life.

What’s the most challenging part of the job?
M – Figuring out how to deal with different personalities. The longer you do wardrobe the more you figure out how to be a chameleon with each actor. Someone once told me that “Actors, and there by people in general are like an instrument but they are all different instruments so they all need to be played differently.” Each person needs something different to function well in a theatre, and as a dresser I am the one they have the most and the most intimate contact with, so I have to figure out what each individual actor needs to best serve them in a production, and make sure their show goes as seamlessly as possible. Adjusting myself and basically how I do my job for every individual person I come in contact with because each individual person needs something different from me.
Z – Doing wigs one handed for a week. [side note: Zachary fractured his left arm earlier this season] Haha. I would say its making sure everything is well represented in terms of the period, that’s a big part of it but also a difficult part because with hair fashion they sort of blend together. You can have a moment here in history but if you look at actual images of people you get this blend of the decades together. Pinpointing a specific year or date is the most difficult part.

Where were you before you came to Mac-Haydn
M – I was the wardrobe supervisor at Arizona Broadway Theatre
Z – I’m still there. I’m currently attending the UNC School of the Arts for Wig and Makeup Design

What’s your favorite part of Mac-Haydn?
M – The schedule. Because its so different from what I have been doing. Its like a shock to the system. We’re doing a new show every two weeks, and so its forcing me to become better and faster at my job. I feel like I’m really improving, in terms of my work, because of the schedule.
Z – Honestly, I’m going to have to agree with Michi. As weird as that sounds, and as much I really don’t like the schedule, its forcing me to know my stuff faster. We’re used to having so much time, but getting here you have to be on your ‘A’ Game.
M – In connection to that, I think it is very important to say the people because it would not be the experience it is without the people you are doing it all with; the stage management team, and the costume department, and the artistic producers, they make it an environment you don’t hate working in.
Z – Even down to the actors, they have made this such an enjoyable experience, just working with them, they’re always, always there. Their constant personalities are amazing to have, it kind of lifts you up. You can be having a rough day but as soon as they step in, you’re like “Ok, what’s up guys?!?” it turns it around.

Any advice to someone just starting out or advice you wish you had?
M – No process is ever easy so always wear your ‘patience pants’
Z – Hair’s not easy, especially when you’re doing it for other people. Its sort of a person’s baby, they care about it, they care about how they look, knowing what people are comfortable with wearing an being open about that.