“I stood up in the public square and made a speech.” 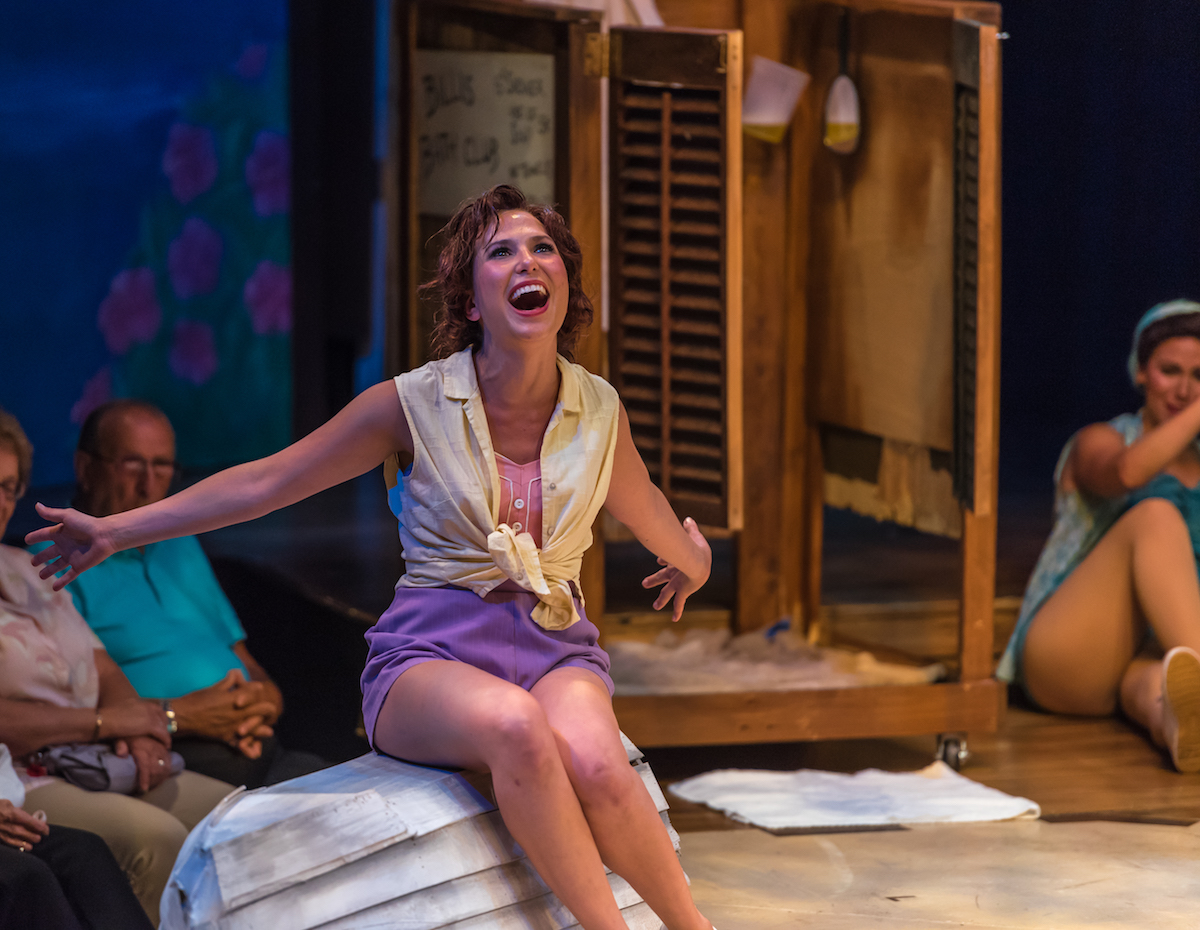 “Rodgers and Hammerstein’s classic World War II musical “South Pacific” has always been a show about political issues. More than a mere transcription of stories from Michener’s novelistic collection of tales it has used several stories in the book to create a seamless and dogmatic story of two pairs of lovers caught up in global and personal wars. Ensign Nellie Forbush, career nurse from Little Rock, Arkansas, is in love with a French ex-patriate who has two children by a Polynesian woman and her home-grown prejudice won’t let her see past that long-dead relationship. Lieutenant Joseph Cable loves the girl, Liat, pure island and purely lovely, but his particular Philadelphia-Patrician up-bringing won’t permit him to love her for herself; her racial background keeps her in a place he cannot willingly enter for a life commitment. While these two love stories dominate the two hour and forty minute musical with fourteen, count them, fourteen hit songs the show deals with much larger issues.

On stage at the Mac-Haydn Theatre in Chatham, New York, those issues pushed their way into prominence and, perhaps its the odd political year we’re having, took pride of place in a most entertaining evening. With excellent music, fine singing, good dancing, grand acting and pretty people to watch the show grew to become a watch-cry for its audience.

The story of Buzz Adams is key to this mysterious transition from romance to bromance to diatribe. A navy pilot in the south Pacific he was a key character in one of Michenor’s stories and plays the same role in the musical. When the show was produced in 1949 he was seen in the role of himself for a short time, replaced by several other actors. Three years later a doppelganger, a look-alike, named Buzz Miller began a successful dancing career both on Broadway and in ballet. He wasn’t Buzz Adams, but he looked like Buzz Adams. Buzz Miller was the lover of choreographer Jerome Robbins and was long associated with the theatrical choreography of Jack Cole and Bob Fosse. A tale of two buzzes–Buzz Miller danced heroes and Buzz Adams was a hero and played a hero, although a background hero. In this production there are moments when his appearance lulls us momentarily into believing he is Joe Cable, real hero in the story.

The principal male character in the show is the Frenchman, Emile DeBecque, played in this production by Steve Hassmer. Here is a man who is a different sort of hero from Adams. He is a man who stood up to a bully, killed him and was forced to run away from the authorities, from his family, from all that made him secure. In the ocean islands he has forged a new life and become a new person who has no desire to be a hero. His disastrous love affair with the prejudiced American nurse turns him into a hero and on his return to his island home he discovers how people, through love, can change into people we do not know. This return implies a happy ending, but there are no guarantees, even with love songs, and the bittersweet ending of this show has always been one of its most appealing elements.

Hassmer is a delight as Emile. He sings beautifully, is just romantic looking enough to carry the character; he acts with a Gallic flair. He is appealing and pleasant and believable. More than that is not possible for this enigmatic man who takes on the tasks he is reluctant to perform, who lives out the illusionary life he has created for himself in a world that shouldn’t know his presence. It is that world, that island world, which allows the romantic nurse an opportunity to subborn her fears and anxieties and open herself to love. If there is any element in this work that is more appealing than that, I don’t know what it is and it is played to perfection by Emily Kron as Nellie Forbush.

Kron is a powerhouse. She sings with a bright, electric tone in her voice. She moves beautifully and is funny when it is called for, particularly in the song “Honey Bun.” She dances gracefully and underplays the dramatic moments into reality instead of staginess. It is a wonderful interpretation of this most difficult role that includes taking a shower and washing her hair on stage. Yes – with water.

Liat is the beautiful and physically enthralling actress Viveca Chow. Her mother, Bloody Mary, is the funny and lovely-voiced Victoria Benkoski. Lt. Cable is the handsome and vocally unstable Wayne Shuker. Mark ‘Monk’ Schane-Lydon is an excellent Captain Bracket and his aide, Cmdr. Harbison is nicely played by David Figliuzzi. Chris Hendricks is a delightful Luther Billis. Emile’s children were played with youthful exuberance by Willow Rody and Nathaniel Taylor.

The ensemble, large and vocally superb, filled in the blanks and made the show into a tempestuous, ever evolving island of period personalities. Josh D. Smith handled the musical chores extremely well abetted by a fine ensemble of players and the excellent sound balance and enhancement by designer/engineer Rider Q. Stanton. Erin Kiernan’s set design enhanced the show as did Angela Carstensen’s costumes. Andrew Gmoser provided perfect lighting.

The director and choreographer created a wonderful world of personal entertainment in this late operetta creation by Rodgers and Hammerstein. Music drifted into scenes to transform those moments into song. A lengthy first act finale scene brought back five of the major first act songs, just as a concerted section of an operetta should. Kowalsky, and Burger, used these musical moments to move their characters into those classic positions that make a great musical a great experience, both amusing and moving. It amazes me how this show, after so many years and for me so many viewings, can still pluck the heartstrings and make me tear up at moments of clearly directed intentions to do so. I guess we’re never too old or too experienced to have those brilliant pieces of theater writing and direction fail us.

This was the show I really didn’t want to see again, but I am so pleased that I did. If you saw it before, forget about the past and see it again, now, in Chatham. You won’t regret that decision.”