“I Could Have My Own Act” 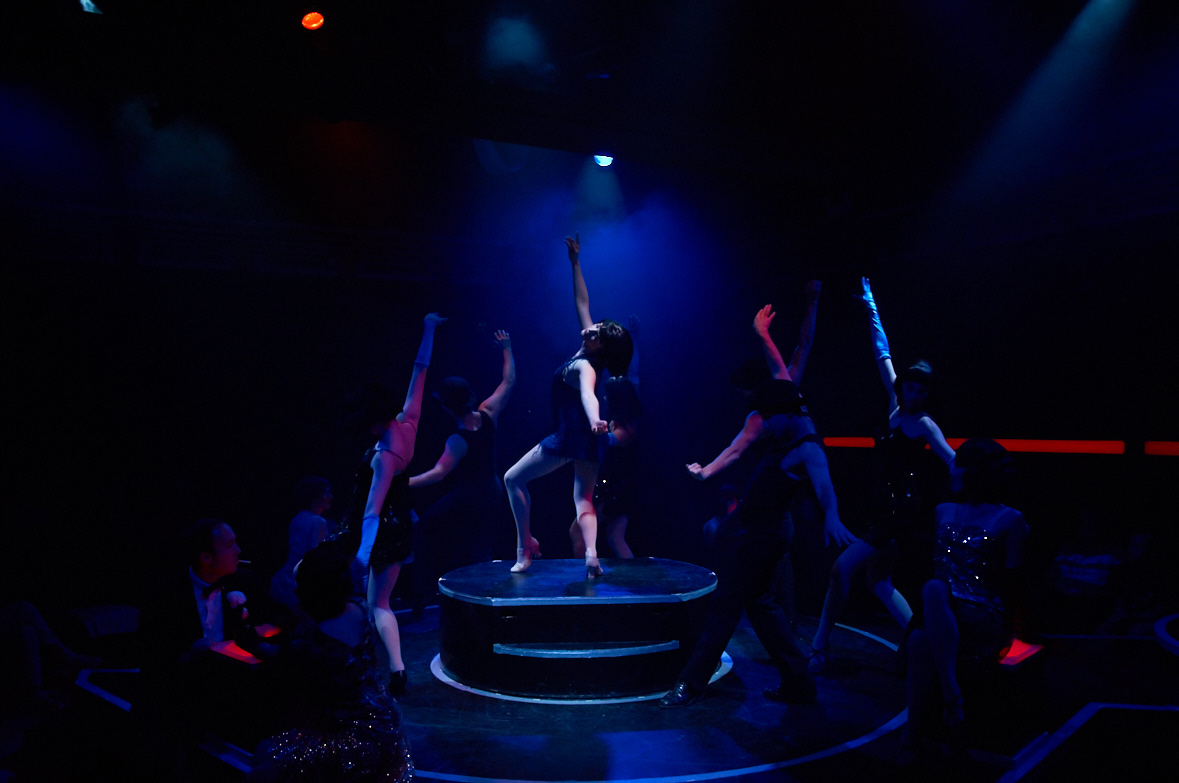 The following is the wonderful review by J. Peter Bergman from Berkshire Bright Focus.
Click here for the Berkshire Bright Focus Website
An obsession with personal success and instant fame permeates this show, goals that many are still finding enthralling in spite of all of the evidence proving that there must be something better than this. Velma Kelly, a Vaudevillian who has murdered her husband and her sister wants this. So does Roxie Hart who murdered her lover because he was leaving her. Their lawyer, Billy Flynn, knows how to exploit this desire for his own good and he, himself, is a prime example of how achieving these goals sets you apart in this world. These are not nice people, but they make some beautiful music in the razzle-dazzle world they inhabit in 1920s Chicago where all that jazz dictates a rhythm for life and though there may be a little bit of good in everyone, nowadays its just a world where class no longer plays a role in the lives of these people.

It has been six years since director John Saunders last brought this show onto the circular stage at the Mac-Haydn Theatre in Chatham, NY, but the show is back and better than ever. There’s a six piece band playing the great John Kander score under the superb direction of Josh D. Smith and conductor Rolin Mains. Kevin Gleason’s set is remarkably flexible and surprising. Jimm Halliday’s costumes are a marked improvement over the last edition and saying that only says they are up to his usual great standards. Andrew Gmoser’s lighing of this show is fantastaic with prison cells constructed of lights and so much more. Zachary Emerson’s wigs are superb.
What makes this production unique is Saunders’ softer eye. None of the characters are pleasant or appealing people and that is the usual hurdle with this show – there’s no one to take you through the difficult journey that Roxie Hart embarks on when she kills her lover, no one to sympathize or empathize with along the way. At best you hope the floor will open up and take them, dancing or not, to some fresh hell. This time, though, Saunders gives to his Roxie a shot at humanity, a real sense of innocence in the midst of her absolute guilt. We hear what she says and we hate it, but we also hear how she says it and we wonder, we really have to wonder, how much she understands about herself. This is a remarkable trick to pull off in a show this blatantly bitter. Somehow the director and the actress, Caitlin Wilayto, have pulled it off.

Bob Fosse created this show for his ex-wife Gwen Verdon and when he added Chita Rivera into the mix a hit was almost completely guaranteed. This was in 1975. The show opened to mixed reviews and still played 936 performances with Mary McCarty and Jerry Ohrbach along for the ride. It was revived twenty years ago with Ann Reinking and Bibi Neuworth in the two leads. The productions were poles apart in style and yet each struck a chord, the second edition winning a bunch of Tony Awards and still running. It’s sort of a pity because this new production in Chatham is so wonderful it could easily transfer to New York City in a New York minute. But it can’t. The revival, now the longest running musical show in revival in Broadway history, is still packing them in.

The company: Caitlin Wilayto plays Roxie Hart as a complex and confused human being whose insecurities and personal dilemmas are both fodder for her future and retribution for her past. She is a delightful dancer and an equally delightful singer but it is her face and her hands that define the role here. Her hands are never idle and her facial expressions are not always in key with the words she speaks. She demands your attention in so many ways and in getting what she needs she finds what she wants. This is a performance I could watch over and over there is so much going on in it.
As her counterpart in the Cook County Jail, Velma Kelly, a dancer and singer of equal force constantly grabs center stage from Wilayto who constantly grabs it back. Bridget Elise Yingling makes Velma into a tornado-like force who can only be contained by the prison matron. She is beautifully dynamic and a dynamo in the choreography. Again, her performance has a ring of truth to it that is not usual in a musical. It is almost as though, singing one of the worst songs ever written, “When Velma Takes the Stand,” and one of the other worst songs ever written, “I Can’t Do It Alone,” she has no need for this material to make her points. She can do it with her body alone.

When these two women finally get together for “Nowadays” its a bit like a miracle of magical realism. Knowing what we know about their characters, disliking them as much as we’re supposed to, when they sing and dance together it is unbelievably rich and you don’t want to let go of them. Fosse knew what he was creating for Verdon and Rivera here and we have it on stage in its fullest force right now and we’re so lucky to have all of this.

Pat Moran is a wonderful, sexy Billy Flynn, less offensive than many others in the role, but still exuding all the snake-oil charm of a Chicago attorney. Conor Robert Fallon brings genuine sex appeal to Fred Casely and to all the other dead men he plays in this production. Andrew Jordan DeWitt is a much less nebbishy Amos Hart and he is quite loveable by the time of this final exit. Aneesa Folds is a grandstanding Matron Mama Morton, a delight to watch and to hear and a perfect opposite to her charges. Folds adds levels to the role by not taking her lines and actions too seriously and thereby creating a Mama who actually may have some hidden matronly emotions. Chris Hendricks plays reporter Mary Sunshine with a grace and loveliness that is difficult to play up in this role. Hendricks, to put it out there, is marvelous. Viveca Chow is a frighteningly real Go-To-Hell Kitty. Lily Lewis’ Hunyak is almost tearjerkingly lovely.

The dance and the movement created by choreographer James Kinney keeps this show fluid, passionate and dynamic and together with the superb character development and nuanced direction provided by John Saunders a series of deadly possibilities are avoided and the final result is a richly rewarding theatrical experience. I don’t say this often (but I have said it before) given the time and the possibility I would be back in this theater for a second dose of the dry, thin air of Chicago because its current recreators have breathed life into the place, time and people of this favorite show, made more so by this company.