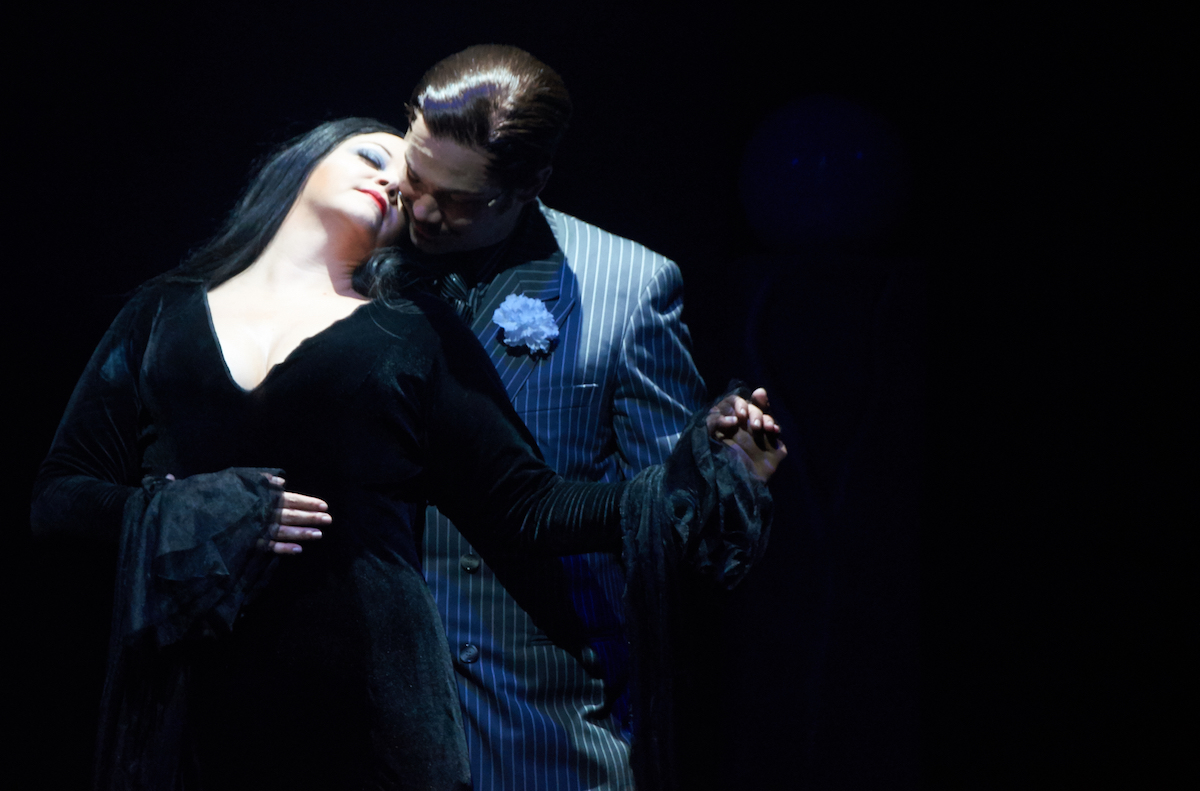 Adapting a book into a musical is not as easy as it seems. Adapting a bunch of single-frame cartoons is easier. The world of story-telling is yours; you decide the whole thing. When Marshall Brickman and Rick Elice opted for the latter they might have gone any way at all. They chose to deal with Wednesday Addams peculiar love affair with a normal boy. The two authors, Rick Elice and Marshall Brickman are award-winning playwrights and screenwriters. Brickman has written for Woody Allen more than once and together they won the TONY Award for “Jersey Boys.” For this show they constructed characters from the Charles Addams cartoons, gave them voices and history and set them down in their New York City home beneath the wide green spaces of Central Park. There, they entertain a trio from Ohio, as out of place in the Addams environment as anyone could be, Wednesday’s fiance and his parents.

Its a bit like offering ham and eggs as an entree, then substituting processed turkey for the ham and cooking the eggs soft-boiled. They are as out of place on the plate together as they could possibly be. Mr. and Mrs. Beinecke have nothing in common with the Addams family. It is highly likely that they would never even have read the Addams cartoons; they are that mid-western and unsophisticated. Luckily, for us, they are also that funny. The Addams Family are funny people and their guests are their equal: funny normals in a funny weird world.

In this new production in the round at the Mac-Haydn Theatre in Chatham, New York, there are no unfunny folk on the stage. Even the long dead ancestors of the Addams clan who come to life in the opening number and stay alive for the duration are funny. The cleverness of the show is its broad-based humor and its very human situation. The family’s daughter brings home a boy – and his parents – and the adults and her sibling have to deal with the reality that their baby is growing up. That, in a nutshell, is the plot of this show.

As the funniest couple in the world, and the horniest, Gabe Belyeu and Carrie Cimma play Gomez and Morticia. Their romance is the highlight of the show and these two young professionals are absolutely brilliant in their parts. He is all smarmy-charmy calling her “Querida,” and kissing his way up her arm. She is the woman of ice who molds herself into a divine Tango-Apache dance that melts her into his embrace. These two actors sing brilliantly, dance superbly, act with a rare combination of tenderness and thrills and leave us with the impression that they are not actors at all, but actually ARE the Addams pair. They are also the funniest romantic leads any show has ever had.

Belyeu has had several seasons at the Mac-Haydn to try his wings at all sorts of roles, but this is his finest creation yet. Here he is a romantic ideal made peculiar by circumstances. Belyeu is so absolutely true to the writers intent that he comes through the outrageous comedy as a serious lover and intently faithful spouse. There isn’t one moment where he works outside the reality of Gomez and so Mr. Addams becomes a real person for us and not a cartoon character.

Similarly Cimma undertakes the role given her and lays to rest any allusions to dead people. She is cold and stern, yet underneath the surface she burns with all-too-human passions. In her song “Secrets” she shows us how easy it is to hurt a woman who has trusted loved ones to be open with her. When her Morticia runs away from home you can see on her implacable face the immovable intent paired with the impossible dream of perfection. Cimma makes all of her moments memorable.

Andrew Lippa’s songs for Gomez and Morticia are filled with the aromas of the Addams cartoons, dark and slightly filthy, funny but deadly serious. His songs for the trio from Ohio are equally outrageous and his manipulations of the normal content of theater songs to fit these misfits in this arena are just as well thought out as anything in the show. Mrs. Beinecke, played by Erin Spears Ledford, joins Morticia in her song and is even more outrageous as her vocal sparrer.

Lippa’s lyrics are the perfect fit for Brickman and Elice’s book; it is almost as though their words escaped into his room and found their way onto his music manuscript paper. Of course in the world of the Addams Family that would never be impossible. In this company’s hands that theory holds water and slowly lets it drip onto the stage. Musically, Lippa is coming from the world of Jerry Herman, a tuneful, easy to hum, pretty to sing land of vocal music that is present in the weird and “sophisticated” world of Central Park by dint of happenstance and necessithy. Everyone in this show needs to be lyrical including Uncle Fester whose love for the moon causes not little amount of ahhhing and oooohing among the famly. Fester is played to silly-voiced perfection by Darrel Blackburn.

The rest of the cast and the crew do everything possible to make this outrageously unreal show into the most normal of theatrical events. Grandma is played with crone-like splendor by Rhnea Wright-Ausmus. Puggsley Addams, the coffin-sleeping kid, is rude and moody and simply fun in the person of Adam Salerno. James Cella gives the butler, Lurch, a human grandeur and a voice you won’t forget. Andrew Jordan DeWitt makes Mr. Beinecke into an all too real man whose final choices are inevitable and delightful.

Wednesday is played with a furious and passionate set of impulses by Emily Louise Franklin and her love, Lucas Beinecke is brought to life by Conor Robert Fallon in his best performance of the season. Together these two are as magical as Belyeu and Cimma, the rightful inheritors of their romantic mantle.

What holds this all together is the superb vision of director John Saunders who understand the difference between broad, exaggerated playing and subtle reality. He never lets his actors go overboard, but has seemingly encouraged them to develop the peculiar realities of their characters. There is not one moment that is deliberately over-played here. As the “normals” and “weirds” combine their worlds the result under Saunders’ direction is a new reality that is both inviting and titillating. Saunders once again (as he has done in the past) provides entertainment that is focused and entertaining and genuinely engrossing.

Dressed in the outrageous costumes designed by Jimm Halliday, dancing the intricate choreography by Sebastiani Romognolo, under the moody and stormy lighting designed by Andrew Gmoser on Kevin Gleason’s immortal sets this company imbues the theater’s final show of the season with the spirit of the reborn, the undead and Charles Addams original intent. This is a very funny show and one not to be missed as August dies away into an early September.

The review was originally posted on The Berkshire Bright Focus Website.