Damn Yankees Review Is In 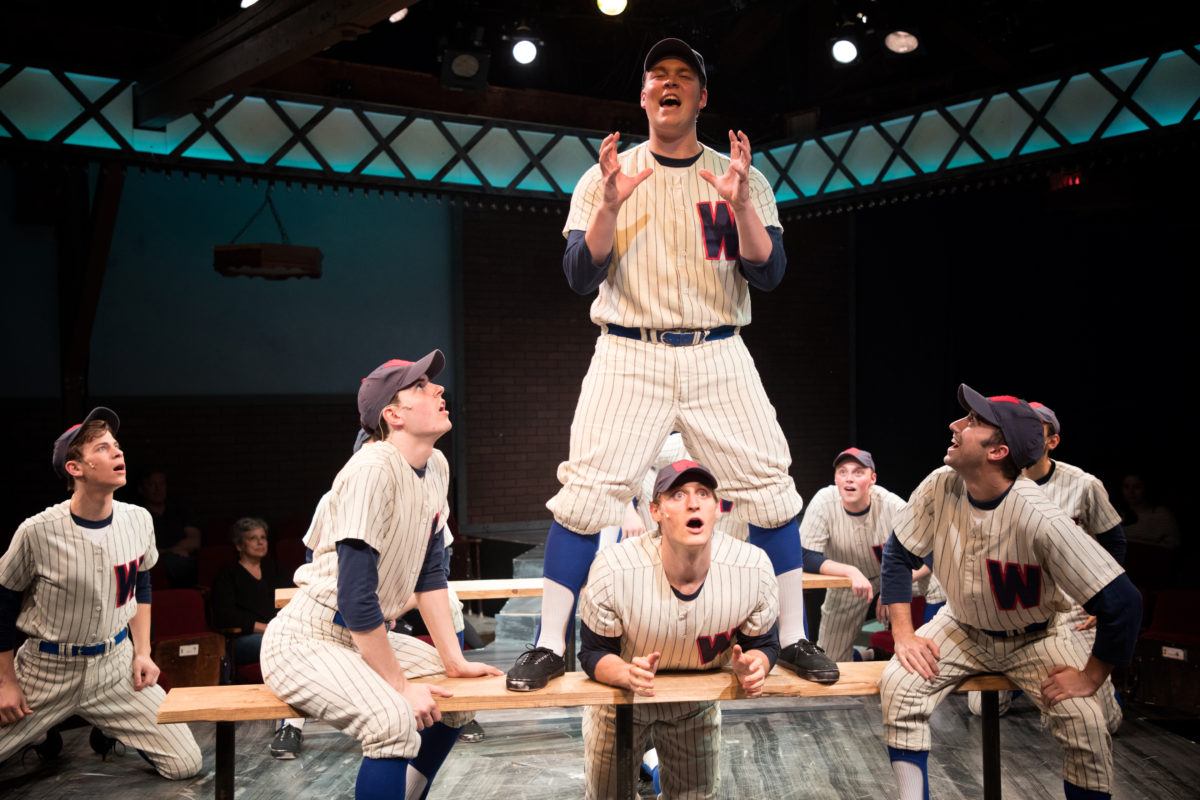 J. Peter Bergman calls our season opener “A damn good two and a half hours…” in his glowing review for the Berkshire Bright Focus.

See the full review below.

“You’re too big for all that sentimental nonsense.”

The MacHaydn Theater has chosen to open its 2018 season with a big, brassy Broadway musical, “Damn Yankees,” that sings of classic concepts celebrating the great American pastime with the blues, the Mambo, a Bolero-like seduction song, bright choruses and ballads of tearful recognition about love and life in limbo (place not dance). This is a big show with large talents involved and the audience is regaled with songs they can hum afterward; with a modest attack on Republicans in Washington DC; with the effect of lies and scandal in world of innocence (suffused with deception, however); and with the wonders of all that fine talents can achieve in presenting something with which we are already familiar. 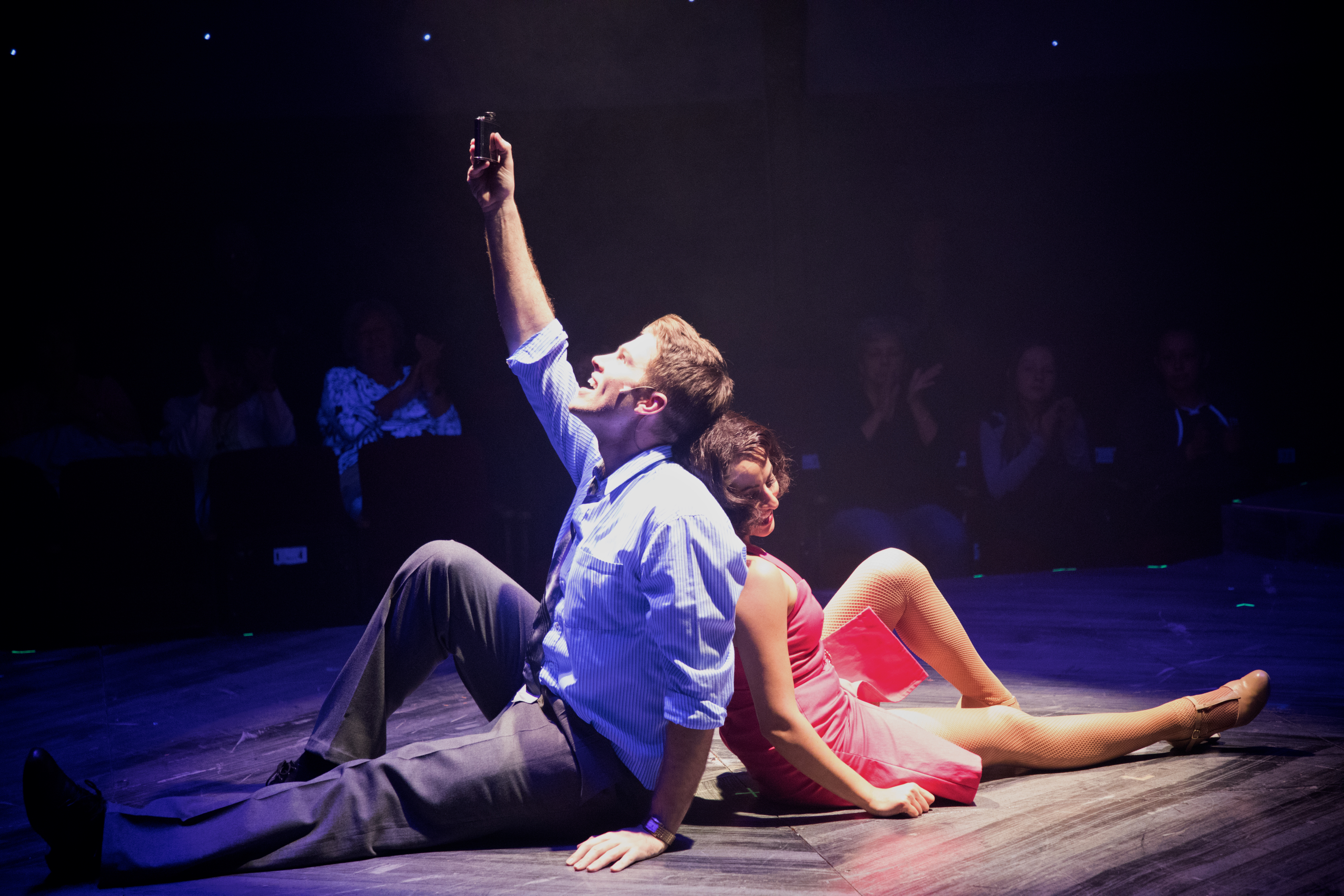 It is the 1950s, the era of Willie Mays and Mickey Mantle and the historic rivalry of the New York Yankees and just about every other team in their league. Eisenhower is in the white house and Mamie – in a hat – is in her cocktails. Meg Boyd in a blue mood as her husband Joe sinks deeper into the baseball season watched on their new television set which, for six months, threatens to keep her a Baseball widow. When offered a unique opportunity to help his favorite team, the Washington Senators, turn the game on its heels, Joe Boyd grabs that opportunity and deserts his loyal wife. He is transformed by his seducer, a certain Mr. Applegate, into a much younger man with a batting average that cannot be beaten and feet two large to wear his own shoes. And that’s just the beginning of his seduction by this Devilish older man. He is given access to the seductress of all time, the incomparable Lola.

These are the five characters who form the hard core of the piece: Joe Boyd and his alter ego Shoeless Joe Hardy; Meg Boyd (their wife); Mr. Applegate, the Devil; and Lola (the ugliest woman in Providence, Rhode Island).They are played (in that order) by Steven Hassmer, Michael Brennan, Julie Galorenzo, Mark Hardy, and Corinne Tork. Galorenzo, aided eventually by the chorus, starts the show off with a blues that transforms itself into a sprightly moan about love and motivation. She is a lovely singer as she proves with her other songs and she moves the audience to tears with second act duet “Near to You.”

Hassmer is equally moving in his farewell song near the top of Act One and his return to her in Act Two has warmth but lacks the spark it requires to get another tear going. Brennan as the younger Joe plays the confusion of character very well and he is good looking, good sounding and good moving when it is his turn to dance through a number with Lola.

Mark Hardy as the Devil is delicious, making choices I’ve not seen before for this character and playing his eventual descent into madness quite wonderfully. As his sweet lemon tart-on-tap, Tork has hips of death, lungs and larynx of strength and fortitude and a set of dance moves that delight. She is an excellent Lola.

In the supporting roles of Doris and her sister, Sister, Emma Flynn and Maggie Eley standout from the crowd. Gabe Belyeu as Van Buren, singing “Heart” and other pieces, is excellent and “Monk” Schane-Lydon does well with the role of Mr. Welch. All the ball players are excellent, especially Chris Hendricks as Rocky. 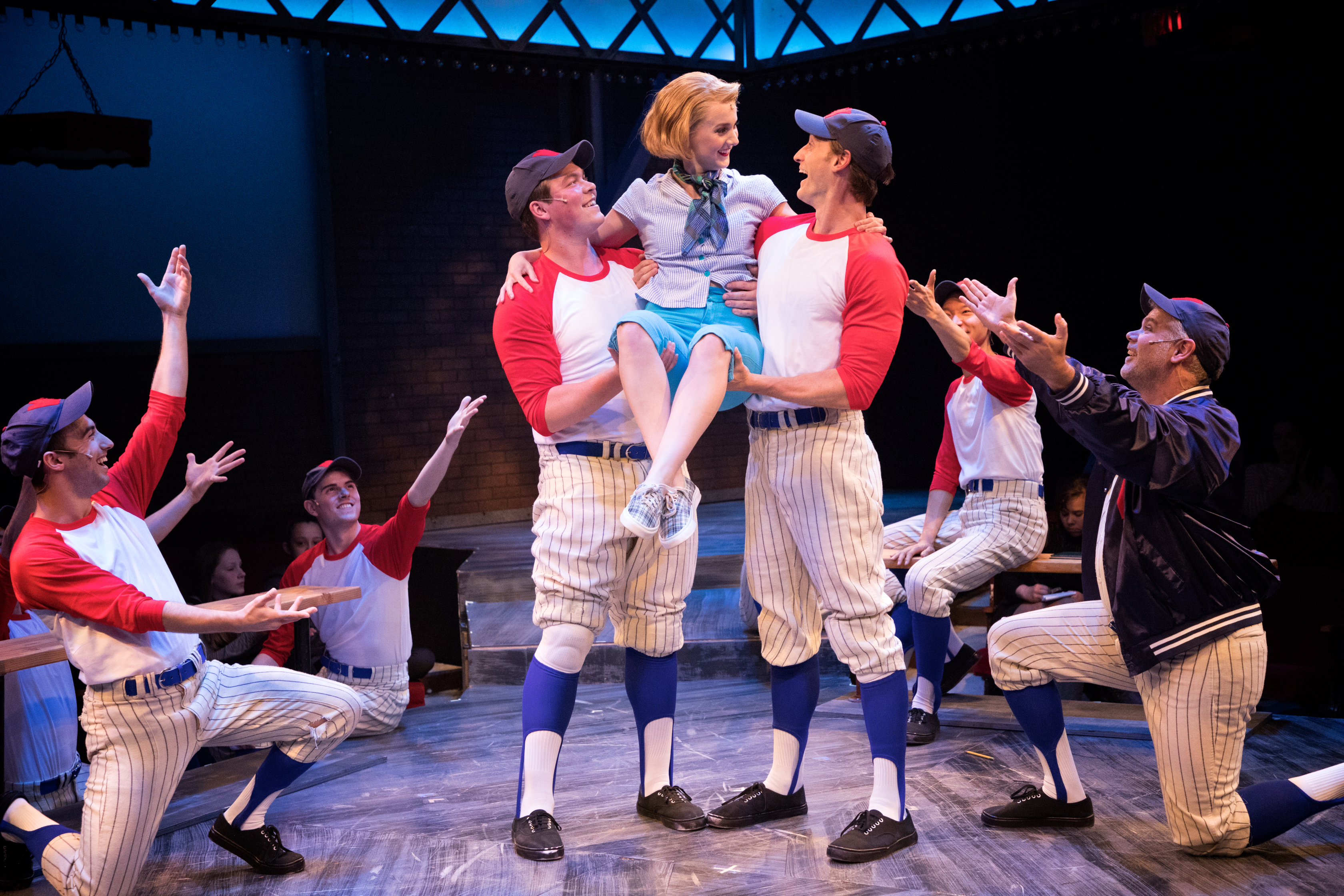 The big delight in the role of Gloria Thorpe is Megan Hasse who blows the audience away with her Merman-like vocalising in “Shoeless Joe from Hannibal, MO.” She is a real find and I look forward to finding her again in another show.

Director John Saunders and his choreographer Bryan Knowlton have done very well with this material bringing things vividly to life and making them all so enjoyable. The show’s designers are equal contributors to the success of this package: Kevin Gleason for the sets, Jimm Halliday for the costumes and Kira Williams for the wigs. Andrew Gmoser’s lighting is sensational, particularly in the song “Two Lost Souls” which could garner him a Berkshire Theatre Award this season.

In spite of the fact that “Damn Yankees” is one of my favorite shows, vividly living in my memory, this is a production of the musical that I would reccommend heartily and without any caveat about this, that or the other thing. It’s just a “damn” good two and a half hours.

Damn Yankees plays at the MacHaydn Theatre, 1925 Route 203, Chatham, NY through June 3. For information and tickets contact the box office at 518-392-9292 or go on line at www.machaydntheatre.org.