The Season Steps off with a flurry of choreography: A Joseph…Dreamcoat Review

“…, it’s not the storyline that will draw you into the theatre’s 49th season opener, it’s the great cast and the stellar production”

Appearing in June 1st edition of the Compass section of the Lakeville Journal. All part of TriCornerNews

You likely know the storyline of JOSEPH AND THE AMAZING TECHNICOLOR DREAMCOAT now in production through June 4th at The Mac-Haydn Theatre in Chatham, NY. Boy gets coat … boy loses coat and ends up in an Egyptian prison … Pharaoh has a bad dream … chaos ensues … boy gets new coat.
So, should you choose to spend two hours of high energy theater at “the Mac”, you likely won’t be shocked by the way things unfold. Be assured, however, it’s not the storyline that will draw you into the theatre’s 49th season opener, it’s the great cast and the stellar production.
There’s always a risk when a summer company comes together for the first time. Will the dancers hit their marks? Will the soloists work with the orchestra? Will the lighting cues work … and the sound mix … and the props?
The able team at Mac-Haydn has little to worry about as the season steps off with a flurry of choreography that flows from the stage into the aisles with precision and is matched with voices that are clear, crisp and robust beyond their years. 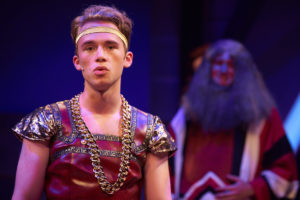 Alex Carr’s “Joseph” is stunning. He has a voice and a sense of stage movement that takes one back to the program again, and again to confirm that yes … he is a rising junior in college.

The depth of Alex’s talent is revealed by his ability to go step-for-step with the captivating Laura Helm, — “the Narrator,” muse, driving force and energetic center of this early work of Tim Rice and Andrew Lloyd Webber. Learning that Laura returns to the Mac-Haydn stage after completing a year-long tour of JOSEPH … may give her performance context, but there is no evidence of road weariness in her command of the part. Every performance is a new performance … and Laura clearly celebrates that fact by bringing her “A-game.”

The directing and choreography of JOSEPH AND THE AMAZING TECHNICOLOR DREAMCOAT are both credited to Bryan Knowlton, and this is an instance where the director should have his own, solo curtain call. Mr. Knowlton’s credits are extensive – Broadway, national tours, film and television. And, it shows. A large cast moves beautifully across and around the compact stage and the effect is like watching the movement of a Swiss watch set to music. Knowlton is a master, and the audience benefits, accordingly. 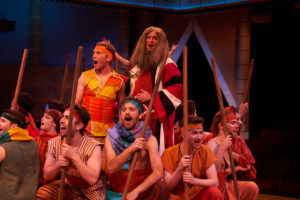 We’ll look forward to seeing these talented young cast members throughout the summer in a seven play series that should be very entertaining. They will carry dreams and heartache and wonderful dancing and lusty singing forward propelled by the musical direction of David Maglione and his associate, Jillian Zack. “The Mac” is all about musicals, and they make the music soar.
JOSEPH AND THE AMAZING TECHNICOLOR DREAMCOAT is on stage at The Mac-Haydn Theatre in Chatham, NY until June 4th. The box office can be reached at 518-392-9292. Enjoy this late-Spring musical celebration. And, since the nights are still cool., don’t forget to bring your dreamcoat.