“That Voice is Truth:” Alumni swing onto the Great White Way

Broadway’s new show Bandstand which begins previews March 31, 2017 features two familiar faces, Andrea Dotto and Ryan VanDenBoom. MHT was able to sit down with them and discuss this new and exciting show, what they have been up to since they left the Mac, and much more.

Mac-Haydn Theatre: Can you tell me about your childhood and how that influenced your career in musical theatre?

Ryan: I grew up dancing at a local dance studio in Bay City, MI. My parents had enrolled me in dance classes at a young age simply as a means for me to blow off some steam. By the time I was 12 I was taking class there probably three days a week. I always loved tap dancing, so when I discovered Singin’ in the Rain that sparked a love for musical theatre.

Andrea: I grew up in a household full of music. My Mom played the piano for church so she was always practicing and prioritizing music in our lives. If we didn’t have a piano in my house, my whole life could have turned out different. If you look at old Christmas videos, we are all surrounded by the piano, my Mom and my oldest sister playing carols and me, dressed as an angel (naturally), putting on a show down in front. My relatives lived outside of NYC, so trips to Nana and Papa meant seeing Broadway. TKTS was our JAM back in the day! I have two older sisters who sang and danced, and my Mom did Musical Theater in high school, so it was all divinely planned for me to fall into this career. I would say my Dad’s business sense helped me survive it!

MHT: You were both at Mac-Haydn at the same time, can you speak on your experience at the Mac and how it has shaped your career since?

Andrea: We were both at the Mac 2009 and 2010! Our first summer stock was together. I think everyone from that 2009 season can attest that it was truly one of the most memorable summers of our lives. I met some of my closest friends there. One of the biggest lessons I would have taken away from that summer is that you can work harder than you ever thought you could, if you have a community surrounding you that supports you.

Ryan: My first summer at the Mac was my first professional theatre job. I was extremely green, and truly receiving a boot camp in quick turn around theatre making. That group of actors my first year was an exceptional group. I’m not sure I’ve laughed more over the span of one summer. I had/have such a deep respect for all of those people, I learned a lot from them. My second summer at the Mac-Haydn I was given the opportunity to choreograph my first professional musical Damn, Yankees! That was such a thrilling experience. There’s no question that shaped my career.

MHT: Can you tell me about your first audition for Mac-Haydn?

Andrea: It was my first professional audition EVER. I was wearing my gem colored dress like any newbie auditionee does. I sang “Orange Colored Sky” (Which I continued to sing for like 3 years. If it’s not broke don’t fix it, right?) I remember, getting my call from Monica only a few days later saying I was one of the first people they called. The pride and astonishment that rushed over me, I remember that moment to this day. It was the beginning of something, you know?

Ryan: My first audition for the Mac was at Strawhats. Thinking back on it…woof. That was a confusing and weird day. Cattle calling for a bunch of theatres that I had never heard of to spend nearly 3 months of my life. Very thankful for how it worked out.

MHT: What was your favorite part of working for Mac-Haydn?

Ryan: The people. I think everyone at that theatre has a good heart and they hire people with good hearts too.

Andrea: The people, the location, the thrill of putting up that many shows. We called it “Mac Heaven”. The girls from Summer ’09 “joke” that if Monica would bring us all back so we could spend the summer together in beautiful Chatham, having Jimm Halliday costume us, we would do it. Happily! 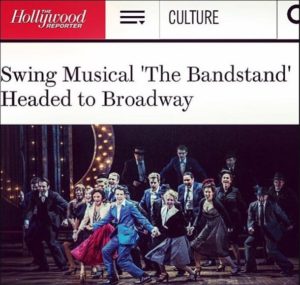 MHT: Andrea, You have been with Bandstand for a while now, can you talk about how your originally became part of the production and what it has been like being part of the development?

Andrea: I have been with Bandstand since it’s developmental lab at Lincoln Center two years ago. I had just taken my Equity Card and it was my first summer post graduating college that I didn’t book a summer stock gig. Admittedly, I was pretty downhearted. But my agent, Eddie, reminded me that staying in the city for the summer could lead to more opportunity! Turns out it lead to my first big gig! I had never seen a show being built from the ground up before. We would check our mailboxes every morning for new lyrics, scenes, vocal parts, entire plot points; Songs would be reordered, dance numbers would be completely scratched. Seeing that room of some of the most notable and talented artists in this business buzz about creating this brand new, original story was truly awe-inspiring. So often in this business, actors become primarily technicians. Building Bandstand from the ground up reminded me that I, too, am an artist first!

MHT: Ryan – how long have you been with the show and how did you get involved?

Ryan: This will be my introduction to the piece as a cast member. I saw the show at the Papermill (Playhouse) and loved it. I had so many friends in that production that after seeing it I simply kept my ear low to the ground about a Broadway transfer and any possible tracks for me. I went through a pretty hefty audition process and here I am.

MHT: Andrea – this is your Broadway debut yes? Can you tell us about how you heard the show was headed to Broadway and you were going with it? Walk us through that moment.

Andrea: Oh. My. Goodness. I heard the show was heading to Broadway on my birthday weekend. I was in the car with my parents and my boyfriend heading home from apple and tomato picking. My phone buzzed and I read “Andy Blankenbuehler” along the top. My heart was in my stomach. I felt like I WAS the one on vibrate, along with my phone. I almost let it go to voicemail out of nerves but my boyfriend told me very firmly, “Answer it.” Deep down, I knew it had to be good news. My parents didn’t know who I was on the phone with because I was trying so hard to play it so cool. Emphasis on “Trying”.

MHT: Can you both speak about your roles in the show and the characters you portray?

Ryan: I will be appearing in the ensemble and covering Johnny. He’s the drummer of the band.

Andrea: I am in the ensemble! We wear many hats throughout the show but my favorite, so far anyway, has been playing a bouncy bobbysoxer named Betsy. She is full of heart and eagerness. Life hasn’t stripped her of her natural born sense of self. I’m trying to get her a social media following. #bringinBetsyback ..think we can make it catch on?

MHT: What attracts you to a show like Bandstand?

Ryan: For me, number one is Andy Blankenbuehler. Anything that guy is working on is interesting to me. Secondly, the time period of the show and subsequently the music and movement style is fun to play in. 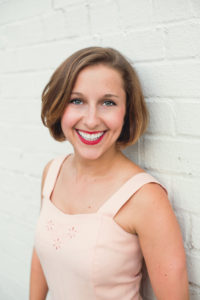 Andrea: I have always been connected to the WWII era. My Nana and Papa met through letters they exchanged during the war. Their story truly shaped my life. There was awareness then to the significance of life and things worth living for. Yes, nostalgia can warp our perception of history. But I think that’s where Bandstand finds one of its biggest strengths. It doesn’t sugarcoat the lives of men and women of that time. Instead Bandstand finds their dignity, their truth and illuminates it. The music of that era will, in my opinion, forever be entertaining. Richard (Oberacker) and Rob (Taylor), our writers, have found a way to make it more than just entertainment. Bandstand explores the purpose the music of that era had, the power it had to connect people, to heal them. I’m so thankful I get to be a part of it.

MHT: What do you hope the audience takes away from this production?

Andrea: I’d like the audience to be filled with joy from the magic of the movement and the music. I’d like for them to see a part of themselves in one of the characters. If we can inspire empathy, then we’ve done our job. My Dad retired this year, and he’s been spending his time volunteering for American Red Cross Military Support. I’d like to think Bandstand had something to do with that.

MHT: What excites you about musical theatre today?

Ryan: I’m excited that the audience for musical theatre seems to be growing. There are more and more avenues for musicals to be featured in mainstream media and therefore more people are developing a relationship with live performance.

Andrea: I love that Broadway can encompass a classic like Hello, Dolly and a total game changer like Hamilton. What is super exciting about a show like Bandstand is that is gives you romanticism and escapism like the classics, but it also has relevance like the new age of Musical Theater. Andy (Blankenbuehler) has taught me many things, but one in particular is how smart the audience is now. How we have to be one step ahead of them. This respect for the audience, this responsibility to show them many facets of storytelling is bound to lead to more great theater. 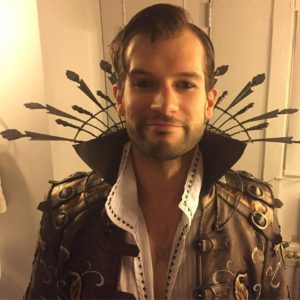 Ryan backstage before performing as Shakespeare in Broadway’s “Something Rotten”
Photo from Ryan’s Instagram.

MHT: What are some of your favorite roles you have played?

Ryan: The mecca for me thus far has to be Shakespeare in Something Rotten!

Andrea: Oh boy! I played Kathy Seldon in Singin’ In The Rain this year and it was an absolute dream come true. Leading ladies that have a bit of a clown in them are my favorites. Charity in Sweet Charity is up at the top. I’ve always admired women like Debbie Reynolds, Betty White, Gwen Vernon, Giulietta Messina. If you can make a funny face, land a joke, and still make my heart break for you.. I want to play you.

MHT: What is the craziest thing to happen to you on stage?

Andrea: Oh, I have had MANY a costume malfunction. But I think my fondest on stage story was when I was doing Fiddler on the Roof a few years ago and the power went out in the entire theater. Something to do with how HOT it was outside. Anyway, It took about 20 minutes for the power to be fixed. So in the meantime, the entire cast came out on the stage and did a Fiddler on the Roof Sing-a-long with our audience. It was awesome.

Ryan: Honestly, simply just stepping in to a role that I understudied was crazy. Out of body, terrifying and thrilling.

MHT: And finally, If you could go back in time and offer younger you a piece of advice, what would it be?

Ryan: I would suggest to my younger self that start studying piano. Or any instrument for that matter.