Originally appearing in the Lakeville Journal, “Euripides Meets the Bee Gees” is a review by CB Wismar. The original post can be found on TriCorner News’ Website

At it’s heart, SATURDAY NIGHT FEVER is a latter day Greek tragedy. The flaws of the central character, Tony Manero, are shared by his buddies who stumble through the sometimes painful coming of age that, like the stone pillars and capstones of a Greek temple, are intractable. The haunting refrain in Barry, Robin and Maurice Gibb’s “Stayin’ Alive” opens the play and telegraphs the message of the evening. “I’m goin’ nowhere … Somebody help me…”

SATURDAY NIGHT FEVER at the Mac-Haydn Theatre in Chatham, NY (now through July 23) infuses the story of love and loss and discovery … even death … with an energy that is palpable. Dionysius meets the disco. Sophocles struggles to be “Stayin’ Alive.”

As regulars at the Chatham theater-in-the-round have come to expect, the music, the lighting, Artistic Director John Saunders’ staging, James Kinney’s choreography and the efforts of the production crew add up to a lively evening. This theater, after all, is a stage for musicals. People attend to be entertained. SATURDAY NIGHT FEVER more than delivers on those expectations. 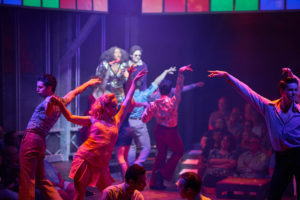 Daniel Velasquez’s portrayal of Tony Manero is magnetic. Considering that the program indicates that Daniel is from Orange County, CA, his portrayal of the disco king from Brooklyn who has to confront his fragile humanity is laudable. This kid can sing and dance, and when he’s on stage, he is electric.

The love triangle at the center of the story is presented with both passion and eloquent frustration by Velasquez’s Tony, Kate Zulauf as the aloof, conflicted Stephanie Mangano and Annette, played with poignant despair by Sophia Tzougros. Annette loves Tony. Tony loves himself … and is captivated by Stephanie. Stephanie loves the imagined future of being a star in Manhattan.

There are several secondary plot lines that weave together to create the full picture of what Thoreau called “lives of quiet desperation.” Tony’s brother, Frank Jr. (Quinn Corcoran), has been idolized in the family since he was ordained as a Roman Catholic priest. When he returns home to announce his departure from the priesthood, his parents are devastated while Tony realizes that he has been eclipsed as the “black sheep” of the family.

And, the ultimate tragedy of the play ends the life of Tony’s pal Bobby, infused with tender vulnerability by Dan Macke, who is unable to deal with the fact that his girlfriend Pauline, played with elegant innocence by Laura Michele Erle, is pregnant and their mandatory wedding will force him into being a man.

There are moments of dramatic clarity, comedic insight and pure pathos in SATURDAY NIGHT LIVE at the Mac-Haydn. And, there is unbridled, wildly energizing, flat-out fun dancing. The young troupe deserves every moment of their prolonged applause for the sheer exertion of youthful fire that ignites the stage in every dance number. No matter which day of the week you see the play, you will surely end up with SATURDAY NIGHT FEVER.