James Rodgers (Young Frankenstein 2014) has spent the last few months working with New Zealand Opera on Sweeney Todd. MHT was able to catch up with James as he returned to the States.

Can you tell me a bit about your childhood and how you got into Musical Theatre? My first exposure to music was at parties my parents used to have with their colleagues and friends. They would pull out the guitars and the song books and have huge sing-alongs. I was 8 or 9 and was supposed to be in bed but would hide out in a hallway and strum along on my own little guitar. Eventually my parents gave up and just let me sit next to the leaders and follow along. I learnt a lot about the joy of making music during those parties. I started performing with my guitar and singing and loved it. However, when my voice broke, (I think I was 11 so quite early), I couldn’t sing anymore. That coincided with the development of my my passion for sport so making music kind of feel out of my life for a couple of years.

My exposure to Musical Theatre came at High School. I went along to an audition for Grease and got into the ensemble. It then became apparent that my voice had come back and I started to get cast in roles for my School productions. I did some amazing shows while in High School and we were very fortunate to have a locally based director, Duncan Whiting, who is extraordinarily gifted. I learnt so much from him about the stage and creating moments for the audience.

How did you get involved with New Zealand Opera?
My first year of University in Wellington, where I studied music, was the same year that the New Zealand Opera was formed. Because the company performed in two separate cities, they had a chorus for each city. I auditioned for the Wellington chorus, got in and was offered some understudy work. I have been involved with the company ever since. It has been a very exciting thing to see as the growth and evolution of the company. It is my national company and I am tremendously proud of the work they/we are doing.

What is the biggest challenges and rewards of doing the same show in three different venues?
Challenges:
1. Managing your energy through the multiple tech rehearsals as we adjusted to the new venues.
2. Being aware of the quirks of the space you are working in. Anyone who has worked at the Mac-Haydn knows something about that… My time at the Mac taught me a lot about that process.
3. Trusting that the show is good, even though an audience may react differently. Each city’s culture is so different so they react differently. I get very frustrated when professional performers come back stage after their first scene and say: “Well, this audience sucks!”. You just have to do the show, tell the story, the best you can. That’s what you are getting paid for!
Rewards:
1. The opportunity to perform the show numerous times.
2. Seeing how different audiences in different cities react to certain elements of the show. (I guess this is both a positive and a negative.)
3. Going through thick and thin with the cast, forming real relationships that have weathered frustrations and celebrated triumphs together.

How do you prepare for a role like Anthony Hope?
1. I read the script/libretto/score.
2. I go through again, marking my part, noting any mentions of my character and looking up any words or terms I am not familiar with, noting the definition in the score/script. During this step, I will also make note of any observations I have, and any areas that I think are going to prove technically challenging vocally.
3. I listen to the piece, preferably in its original version. Easy for Sondheim, not as easy for Verdi…
4. I search for materials of interest: the source material, biographies on the composer and writer(s), information on the time and place of both where the show was set and when it was composed, history of the show’s performance, notable productions. Anything that may be of interest.
5. I start to learn the material separately: I start with notes without words and words without music. I spend a lot of time in this part of the process, particularly when working for an opera company, as the expectation is that you are memorized on day one of rehearsals. That means a lot of time spent just getting the material in the brain before you turn up.
6. I work “trouble spots” vocally, making sure my voice is navigating difficult passages in the most efficient way. I still don’t sing the words for quite a long time when doing this. If you can sing it on an [ah] vowel, you can then move on to the words as adding the additional vowels and consonants will add a whole new realm of difficulty. This work goes on throughout the process as little things always pop up. However, if I take the focussed time early in the process, it proves less problematic later.
7. I put it all together and take it to my voice teacher and coach(es), who help me refine getting the most out of the material.
8. I memorize.
9. I continually “squeeze the lemon”. By this I mean that I never stop trying to find more “juice” in the material. For masterpieces, like Sweeney Todd, there is always more to discover in either music, text, context or myself. 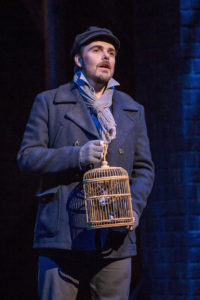 What is your favorite part of playing Anthony Hope?
Being a part of what I regard as one of the great artistic achievements of the 21st century.

What do you think his biggest flaw is? His biggest obstacle? How do you relate to Anthony?
Because of his own experience, he is naive about the world. Being from an upper middle class family, and having been lucky, he has never, until now, been subjected to the type of mistreatment that faces Benjamin Barker (Sweeney Todd). When faced with it, he doesn’t have the fortitude to follow through on his promise to Todd that he’ll: “Kill a dozen jailers if need be to set her free.” He talks and threatens, but when it comes time for action, he wilts. That can be a real problem for people who grew up with some degree of privilege, they are afraid to give it up.

How do you approach such an iconic song like “Johanna?” How do you give it your own twist?
I read what Sondheim wrote, both in the score, and generally about music and his compositional process. He knew what would work and he wrote it down. That, along with the positioning of the song in the show, is my guide, giving me the informed opinion that is required to create an “interpretation”. Putting my “own twist” comes from personalizing those markings and finding motivations that work for my take on the character.

Can you discuss what you think makes this production of Sweeney Todd unique?
1. It is VERY well sung across the board.
2. Our Mrs Lovett, Antoinette Halloran, is absolutely amazing. Her detail creates one of the most remarkable performances I have ever seen. She is really an incredible artist and an inspiration to me.

What is it about Sweeney Todd as a story and a score that makes it so iconic?
I truly don’t know. Yes, technically the pacing of the piece is remarkably efficient, the characters are complex and interesting, the balance of comedy to horror to plot development is perfect. However, that could be said of a lot of pieces. Sondheim just has a sense of the entire picture of musical theatre that is his genius.

What do you hope the audience takes away from Sweeney Todd?
I think it is fascinating that Sondheim writes in the final Ballad in present tense: “His needs ARE few, his room IS bare….. Perhaps today you gave a nod to Sweeney Todd.” This reads to me like a warning that wealthy people better be careful how far they let the lower classes fall. If you disenfranchise and exploit people, you can create “monsters” such as Sweeney Todd. I guess not a lot has changed since 1979.

Living in New York and being from New Zealand, and going to school in both, how do you think the training varies between the two?
My education in New Zealand, at the Victoria University of Wellington was excellent. However, at a conservatory level, the United States provides one of the best musical educations in the world. Every aspect of the Manhattan School’s training was far more detailed than I had received in New Zealand. Also, being in New York, there is a lot more possibility to learn through osmosis.

Is there one school’s training that you find yourself utilizing more than others?Ha, in a strange way, my own. Don’t get me wrong, I have had incredible list of teachers and mentors. However, over the years I have come to realize that all the amazing things they taught me were tools. I am the one who has to determine what to use and when. As a performer, I am in the business of practical application, not theory, so I have to find a way. That means I will pretty much try anything to get the best possible result I can. Sometimes, none of the techniques I was taught work. Then I have to come up with something on my own, ultimately trusting my own judgement.

What advice would you have to a young performer starting out?
1. Know the material and all aspects of it.
2. Listen respectfully to everyone.
3. Don’t think you know all the answers, you don’t.
4. Never get defensive when someone gives you advise. Either take it or leave, but don’t belittle their opinion or your own talent by being resistant.
5. Work hard when it’s time to work and rest well when you need to.
6. Know the people who you can really trust to be honest with you. Value them immensely. It will be a short list.
7. Trust and look out for yourself as no-one else, no matter how much they love you, actually knows all the elements in play.
8. Strive for exceptional and be willing to fail.