Appearing in the June 15th edition of the Compass section of the Lakeville Journal. All part of TriCornerNews.

There are at least six good reasons to put “Dirty Rotten Scoundrels” at the Mac-Haydn Theatre in Chatham, NY on your “Must See“ list. At least six.

In no specific order (so as not to offend the responsible parties) the performances of Gabe Belyeu, Madison Stratton, Colin Pritchard, Judith Wyatt, Kelly Gabrielle Murphy and Steve Hassmer work together like a finely tuned orchestra to present one engaging, high energy, lively and just plain funny evening of music and dance.

With a deep bow to the direction of John Saunders, the choreography of Sebastiani Romagnolo and the musical direction of Jillian Zack, the imaginative work they each did allows the talent assembled to be the entire focus of the evening. 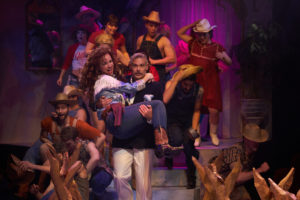 The script by Jeffrey Lane, based on the 1988 feature film that starred Steve Martin and Michael Caine is buoyed by the music and lyrics of David Yazbek. The strong voices of the principal cast carry the evening, providing moments of humor and pathos that punctuate the double entendres, sight gags and flowing stage movement that keep the audience fully engaged.

Without belaboring the sub-plots that whipsaw across the Mac-Haydn stage, the tone for the evening is set with the first production number – “What They Want.” From the opening announcement of how this tale is going to unfold, Gabe Belyeu’s Lawrence Jameson leads the charge. He is joined by aspiring grafter Freddy Benson presented with elegant, gymnastic physical comedic expertise by Colin Pritchard. Their love/hate relationship provides countless moments of welcome laughter.

Two of the ladies of the play – Judith Wyatt as Muriel and Madison Stratton as Christine Colgate – delight, charm, deceive, seduce and triumph in ways that are so refreshing that the audience is fooled into thinking they are the innocent victims when, in fact …

The other two principals deserve more than a polite round of applause. The play wouldn’t work without them. Mac-Haydn veteran Steve Hassmer’s presentation of Andre Thibault has refreshing overtones of Claude Rains as Captain Louis Renault in “Casablanca.” We expect him to order “Round up the usual suspects,” at any moment.

Kelly Gabrielle Murphy adds the touch of brash, boisterous Oklahoma to act one that anchors a tour de force as Benson and Jameson extricate the latter from a dreaded trip down the aisle and exiled matrimony on the great American plains. 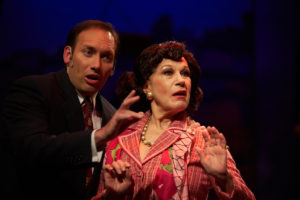 We fully understand that the drive through the New England countryside to Chatham, NY might be more than the usual investment of time one associates with a night out. A visit with “Dirty Rotten Scoundrels” is worthy of that drive, however, and the resultant smiles, chuckles and laughs will more than compensate for the mileage.

“Dirty Rotten Scoundrels” will be presented at The Mac-Haydn Theatre in Chatham, NY through June 18th. Tickets and information available at the box office, (518)392-9292.