A Mac-Haydn Conversation with Gabe Belyeu

You’ve seen the video of Gabe Belyeu’s 30 minute transformation into The Wolf (here’s the link), and if you have not I highly recommend checking it out. I was able to sit down with Gabe during rehearsals for his next role Curtis in “Sister Act” to discuss his approach and relationship to the playing The Wolf in “Into the Woods.” 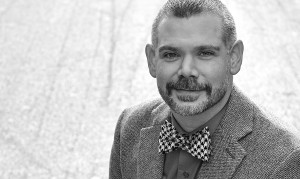 MHT: How do you approach a character like The Wolf?

Gabe: John (Saunders, the Director) and I are friends outside the theatre so we have conversations all the time about things that we are working on so the approach to The Wolf was definitely something we discussed. Starting with The Wolf, it is so much based on physicality and then working backwards from there. We were working with the backstory that I was maybe another brother to the princes who was put under a spell by The Witch because he was a womanizer. His curse was instead of having those urges, he would have the urge to eat women instead.

MHT: Can you elaborate on the physicality?

Gabe: The wolf is the only animal (in the play) that is anthropomorphic, he is the only one with human characteristics. I definitely watched some wolf videos and as far as the makeup, I referenced photos of wolves. Its a loose adaptation; i can’t crawl on all fours the whole time, as much as I would love to (laughs). It definitely came into play as far as I wanting to keep him low to the ground as much as possible. Especially because of the look we decided to go with for his costume its a little more on the human side, there were a lot of human elements so I wanted to keep as much of the physicality low to the ground as I could to balance that out.

MHT: I have to imagine a role like this, you are involved quite a bit with the design elements of the costume, wigs and makeup, can you talk on that a bit?

Gabe: The costume was definitely Jimm Halliday. He did bounce ideas off of me but the design was all from his brain. It definitely went through stages. There are things we originally try that had to be adapted before we got to the end product.

MHT: What about with Zach Emerson (Wigs/Makeup)?

Gabe: We collaborated on the prosthetic we use. Zach and John chose. The design of the makeup was something I did but they approved and adapted. The metal whiskers were a John choice. The wig went through different stages but that was all Zach, but it is never a one person process.

MHT: What got you into the world of elaborate makeup design?

Gabe: I took a makeup class in college and I fell in love with it. I’ve gotten to do it with CATS which I’ve done twice. I’m a big fan of Halloween so anytime I can do makeup I will. But again, that’s also part of my process, I don’t feel like I can go on stage without makeup on, I feel kind of naked if I don’t have some kind of makeup on. Its part of becoming a character to me.

I watched a lot of makeup videos too and picked up on little things here and there, like little things you wouldn’t think to do necessarily. It is a lot of technique; trying to use the flat side of a brush to do those wispy things that make it look like fur and the backend of the brush for the dots on your muzzle for your whiskers. I tried a bunch of a different things before we got to the final product.

Gabe: I was glad to get this chance to feature makeup and what you can do to transform into a character.