“…this show is the quintessence of wit and charm”

“What good is love when there is no hope? Love, Hope”
A Review by: J. Peter Bergman
Posted on Berkshire Bright Focus

Below is the full review, for its original posting, click the link above.

What is urbanity? It has little to do with living in a city; it is a style of wit and charm in which Cole Porter, the songwriter, seemed to prosper. “Anything Goes,” now on stage at the Mac-Haydn Theater in Chatham, NY seems bent on proving that charm and wit are so, so worthwhile. They happen to be right and this show is the quintessence of wit and charm. It feels as though I am using those two words too often, but what is too true is how well they apply to any piece written about this production at any time.

The roster of Porter tunes is remarkable: “I Get a Kick Out of You,” You’re the Top,” “There’ll Always be a Lady Fair,” “Blow, Gabriel, Blow,” “All Through the Night,” “The Gypsy in Me,” “Buddie, Beware” are sensational. In this version of the most recent revival edition of the show we also have some classic songs written in the era but not intended for this show: “Goodbye, Little Dream, Goodbye,” “It’s De-Lovely,” “Friendship,” “Easy to Love.” With a slightly adjusted script the end-result is a show that is total fun with a sympathetic edge. What this proves, simply, is that Cole Porter is an incredible songwriter. For this show it proves that he is still more reliveable than any modern theater writer, better than Andrew Lloyd Webber, better than Stephen Schwartz.

This show has two heroines, one hero, three character men and a mother, along with two Chinmen, one “girlfriend,” sailors of all sorts and a male quartet. I can’t find anything to criticize and, in fact, the rendition of “Blow, Gabriel, Glow,” by Angela Travino and company actually got me applauding, something I try not to do when I’m reviewing the show. In a nutshell, here’s the plot: Billy, involved with Reno Sweeney has fallen in love with a society girl, Hope Harcourt, who is, due to the influence of her mother Evangeline, engaged to a dopey, titled Englishman, Sir Evelyn Oakleigh, a man who once had sex with a Chinese girl in a rice field. They’re all on a ship, transatlantic, heading for England. Also on board are two young Chinese men, saved to Christianity by a preacher who is mistaken for a gangster while a gangster is mistaken for a priest travelling with a young sex-starved woman. Everybody meets on the boat and the story is off and running. 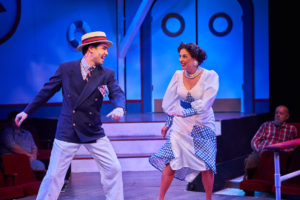 Sam Pickart does very well by Billy. He has charm and sparkle, sings decently, dances well and plays the pathos to perfection. Megan Hasse delivers Hope’s hopeless lines very nicely and sings her songs with poignant prettiness. Darryl Blackburn has fun as Moonface Martin, the gangster in disguise, and delivers his solo with undisguised passion which is delightful. Billy’s Wall Street boss, Whitney, is played with utter reality by Brian D. Wagner and Erma the “moll” is delivered with humor and an honest resonance by Katie Skawski who delivers well in her big second act number.

Cathy Lee Visscher is a humorous delight as Evangeline Harcourt, Hope’s ever hopeful mother. Lord Evelyn is delivered with very amusing affectations by Dakota Dutcher who never makes him effete, never gives him two left feet, and manages to remind me of Groucho Marx in his very funny movements in his Gypsy song. In general the company acquits itself well. No one ever seemed out of character or period (1934) and the show really did fly by and end much too soon. The running time opening night was two hours and twelve minutes.

The role of Reno, written for the young Ethel Merman, is played here by Angela Travino, a woman with a much smaller, much softer voice who can still let it ring as she desires and who plays this role with appropriate tongue-in-cheek gusto. She has a good time playing the part and that shows in the final result. Dressed (as everyone is) by Jimm Halliday in costumes that run the gamut from arch to zany, this Angelaish Reno, accompanied on board by her four angels dressed in more beads than there are in heaven, plays the songs and the scenes for every drop of blood, guts and laughter the authors have placed in them. This is a wonderful performance.

The sets by Erin Kiernan are great as is Andrew Gmoser’s lighting. The large pit band needs to remember to tune up before the show. Michael Dunn’s wigs are almost ideal. Under Robin Levine’s terrific control of the stage – this man knows how to do theater in the round – all of the elements blend seamlessly to make one hit show of one hit show. This was a good one to see. A very good one.

Anything Goes plays at the Mac-Haydn Theatre, 1925 Route 203, Chatham, NY through July 2. For information and tickets contact the box office at 518-392-9292 or go on line at www.machaydntheatre.org.